It would be difficult to share much about the teachings I received from Rinpoche over the years I was his disciple. In many cases he taught in response to a specific question, so the character of the answer and its importance derived from how it related to a specific situation in my development. These teachings would be difficult to communicate. But two things stand out, however, which I think I can share.  One was a comment he made during an initiation and teachings on the Ghuyasamaja Tantra and the second was the answer to a question I asked about the attainment of Manjushri.

The Guhyasamaja teachings took place in Garrison New York.  Toward the end of the week Rinpoche thanked the sponsors of the event.  He told the assembled audience that we would all be in his circle of disciples when he became enlightened, and that the sponsors would be in the inner circle. As the years have passed and I have contemplated this statement it has integrated itself with my practice of guru yoga.  The image that developed in my mind is that of luminous planets circling the sun, with myself and the other disciples as the planets and Rinpoche as the sun. And the sun, of course, is in a circle of suns around another center: the galaxy of lamas and realized beings circling the Buddha.  And of course there are many Buddha galaxies spinning through our vast Buddha field.

Sometimes when I feel Rinpoche’s presence I experience this limitless cloud of light beings around light beings. In essence, we are all bodhisattvas sitting together.  This is something I understand from the answer he gave to a question I asked one day when Kayla and I were living at the Namgyal Monastery guest house. We are all practicing the same visualization, I commented, and as Tara Rinpoche had taught, on that basis we will become enlightened in that form. Since Tara Rinpoche and Locho Rinpoche and Kayla and I all practice Manjushri, when we are enlightened we will have the form of that bodhisattva. So my question was, more or less, will we be the same Manjushri at that point or different Manjushris? He said that we would be different Manjushris in the sense that each of us had our own mind stream which had become enlightened, but the same in the sense that we were Manjushri.  All of the same Manjushri taste, as the Tibetans say.

Both the same Manjushri and different Manjushris.  This may defy logic, but if one thinks metaphorically one can recognize how it can be true. So my meditation is one of galaxies of Manjushri bodhisattva stars circling each other.  This is how I practice the presence of the lineage of lamas from Shakyamuni Buddha through Nagarjuna, Atisha and Tsongkhapa right down to the Dalai Lama, Tara Rinpoche, Locho Rinpoche and, finally, myself.  David, finally at home -- sitting in a universe of buddhas and bodhisattvas. 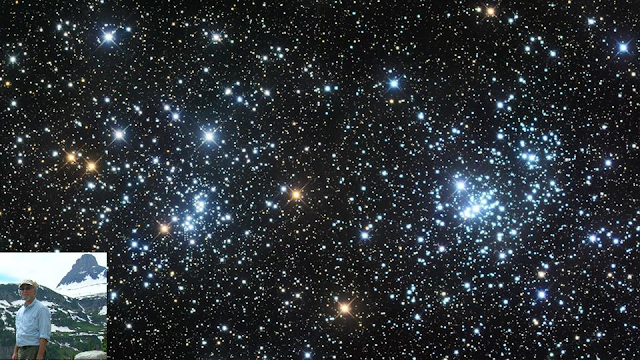