In my previous post I wrote that the Dalai Lama had sent Kayla and I to Locho Rinpoche.  Of course it was a bit more complicated than that.

A year after Tara Rinpoche's death we were finally able to fulfill his last instructions to us, to see His Holiness to find out what to do next in our spiritual practice. He advised us to do a one month long accumulation retreat on the fierce Manjushri. I asked for someone to guide us on the retreat and he suggested either the current Abbot of Namgyal, Geshe Wangdrak, or the former Abbot, Locho Rinpoche. It seemed that our choice of “spiritual friend” to guide our retreat would be simple. Locho Rinpoche was in Ladhak and Geshe Wangdrak was at Namgyal. We moved from our room in the Green Hotel into the Namgal Monastery guest house and began our daily sessions under Geshe-la's guidance.

We also wanted to meet Locho Rinpoche, but when he returned to Dharamsala in late October he was inaccessible because he was recuperating from an auto accident he'd had on his return trip. After a few weeks we heard that he was receiving visitors, so Kayla and I went to the Green Hotel, where (ironically) he lived, to organize a meeting. There we met Locho Rinpoche's niece, Yeshe, who showed us into a room with a television set and two Tibetan carpets set on platforms under small windows. We left our shoes on the concrete floor and sat on the platforms. Across from us, the wall was covered with shelves containing cups, china, statues and scriptures.

After a few minutes Locho Rinpoche's brother, who was also his attendant, came out from an adjoining room and had a brief conversation with Yeshe, and then the three of us were ushered into a small room stacked with various boxes whose labels indicated a variety of consumer items, mostly from Japan. The walls had lovely thankas and there were many maroon and gold carpets spread about on a platform bed and on the floor. Locho Rinpoche sat on the bed. There was a window behind him through which bright light streamed into the room. He was small, but broad, with a hint of a pale colored mustache. He wore dark glasses because his eyes had been hurt in the auto accident. The glasses, combined with the darkness in the room and the bright light at his back made it almost impossible to actually see his face clearly. I had to use my inner senses to get a feel for him, and after scanning a bit what I "felt" was stunning. Before many minutes had passed I knew that he was one of those few remaining lamas whose charisma makes them seem somewhat more than human. A certain energy surrounded him, the nature of which began to reveal itself to me over the course of successive meetings. 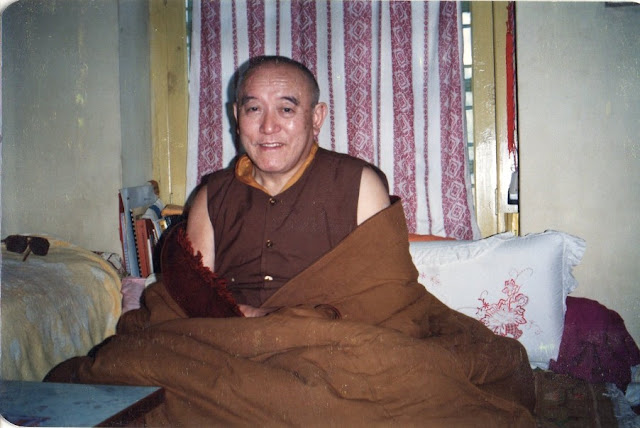 At this first meeting he was rather immobile physically. He never seemed to look directly at us, but still seemed quite present with us. He sort of buzzed. "He is a mantra machine," I later said to Kayla. The mantras never stopped; I could feel his mind merged with mantras, resonating mantras. Kayla said she had the distinct feeling through the whole interview that while in one way Locho Rinpoche never looked directly at us, in another way he was looking at us directly, but through a different dimension -- as if he were looking directly into our minds and our past lives.

"I'll do whatever I can to help you" he said. His attendant offered us tea and the conversation dropped off for a few minutes. Then he resumed the conversation. "Tara Rinpoche and I were friends at Drepung Monastery" in Tibet, where they had trained before the diaspora. In fact he had been in the class one year ahead of Tara Rinpoche. "We were very close, like brothers."

As I sat with Locho Rinpoche I felt the inner blissful melting I sometimes felt around great lamas. I realized how hungry I was for it and how much I had missed it since I had last been in Tara Rinpoche's presence. But I also remembered the Dalai Lama's advice about not trying to find a new personal lama.

We returned to a discussion of our retreat, saying that we had initially expected to spend about three weeks on retreat, but following Geshe Wangdrak’s suggestion, we had extended the retreat to three months and had not as yet concluded.

"I'm not feeling up to visitors much now, but come back after twenty one days and I'll be glad to meet with you."

That was a clear sign that the interview was over, so we thanked him for his time, prostrated and left. The meeting with Locho Rinpoche had left me feeling like honey inside: warm and golden. I said to Kayla, "I feel like we just stepped through a door and that our lives are not going to be the same." I had no idea at the time just how true that statement would turn out to be.

Precisely twenty one days later we had accumulated enough mantras to end our retreat. Coincidentally, Geshe Wangdrak left Dharamsala for a teaching tour and we began what became weekly teachings from Locho Rinpoche.

As the weeks passed and we spent more and more time with Locho Rinpoche I found myself being drawn more and more deeply into our relationship, into the charisma of his energy. I thought that he could be my lama, but the Dalai Lama had told us that we should not let our grief from Tara Rinpoche’s passing push us to find another lama. That we should wait. So I watched as my heart opened to Locho Rinpoche, but at that time made no attempt to become his disciple.
Posted by David Komito