At Green Gulch Zen Center residents and visitors were called to the Zendo by the sound of the han.  It was a large slab of wood which was rhythmically struck by a mallet.  The han at Green Dragon temple was venerable: it had been struck so frequently that it had a deep depression that obscured the words inscribed on it. Do not waste time; consider the great matter of life and death.

I've been considering this matter for much of my life.  Now that I am 74 I am watching my once muscular limbs wither and my mind get increasingly forgetful.  This "great matter" has my attention with more salience. 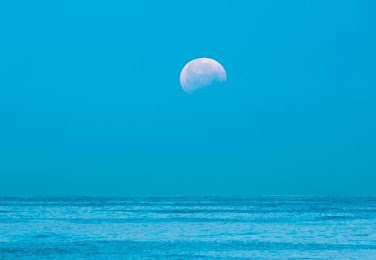 In my previous essay about the finger pointing at the moon I wrote "And then of course, there is the moon itself, whose silver white light is a reflection of the sun’s light. Did the Zen masters know the source of the moon’s light? What might it mean that the luminescence of our mind is a reflection of something?" This question, in the literal sense, has occupied me for the better part of my life.  I've asked many great lamas about this. What is the relationship of our mind-streams? Or in the metaphor of the sun illuminating the moon-like mind, ultimately, are our minds the same or different?  When I asked Geshe Ngawang Dhargyey, Tara Tulku Rinpoche and Denma Locho Rinpoche they all gave the same cryptic reply, "There are several answers to this question."

For me this question is like the depression in the han.  It is the great matter. And it is intimately tied to the question of the reality of rebirth. For the Zen and Vajrayana Tibetan masters this may not have even been a question.  But I am a modern person and the question remains.  It is not only what is the relationship of my mind-stream and that of the masters, it is the question of the continuity of my mind or consciousness beyond death. I began the practice of meditation in 1966 with Thich Tien-an. Now, 54 years later, the great matter is unresolved.  In fact, over the years, the question only has become more complex.

"There are several answers" the masters have said. How unsatisfying, in one way.  But how open at the same time. It is almost like a Zen koan.  Not "take your pick of which answer you like best" but something else I suspect.  That there are different teachings is the obvious meaning. That the mind is limited in its ability to understand that which is its own foundation strikes me as another meaning. I prefer the later, though this does not cancel the former.  In fact it almost proves the former. Perhaps the mind cannot grasp its true nature, just as a hand cannot grasp itself. Not being able to grasp itself, the mind makes up stories about itself because just as grasping is a function of a hand, story making and theorizing is a function of the mind. And as the finger on the hand points to the moon, so the mind points at its own nature through its stories.

It seems that different people need to hear different stories, and perhaps the stories even evolve as we change and evolve. Geshe Ngawang Dhargyey replied to my question: "There are several answers to this question." That was it. He shared some answers but did not say "this is the best answer."  But when teaching in Seattle eight years earlier, he told students there that "... your own mind and the Guru's mindstream do become indivisible on your attainment of complete enlightenment." Apparently he decided I needed to hear a paradox, that I had to work on the problem.

Curiously, reflection on this great matter brings my thoughts to the ancient Gnostic Christians.  The Church patriarchs declared the Gnostics heretical for many reasons, but Irenaeus was very specific in one of his many criticisms. You can't let people draw their own conclusions about spiritual matters. They either don't have the capacity to think and experience clearly or they might get it wrong and lose their souls. And since he was a patriarch of the Roman church there was also the power issue.

Buddha insisted that we not simply depend on authorities, that we figure it all out for ourselves by testing the teachings we are offered. On the one hand this is very unsatisfying.  I just want to know about the consequences of my death and the deep relationship of my mind and that of others. Please just tell me and pacify my mind, as the second Zen ancestor said.  On the other hand, the insistence that I explore and verify the truth for myself has been like the clock spring which turned the years of my life of exploration, of my questioning.  It has forced me to be honest about the ambiguities of the human condition. "There are several answers to this question."