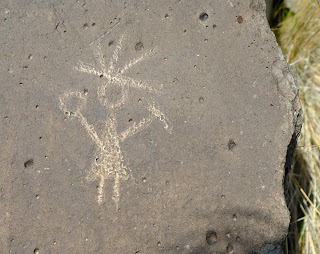 An anthropologist I knew once told me that humans make sense of things by telling stories. That was sort of a revelation to me.  The importance of stories later was reinforced when I read the eco-philosopher Thomas Berry who asserted that

It's all a question of story.  We are in trouble just now because we do not have a good story.  We are in between stories.  The old story, the account of how the world came to be and how we fit into it, is no longer effective.  Yet we have not learned the new story.

By old story he meant the Christian creation story. You know -- 6 days and then God rested. For a new story he proposed a spiritualized version of scientific evolution. He died in 2009 and I don't know if he had come to think that the scientific story of the earth's genesis had morphed into a futuristic environmental nightmare.

We don't tend to think of scientists as story tellers.  We think that they offer truth and facts. But really, when you connect the big-data-point-dots you get a story.  The resulting environmental story looks pretty apocalyptic right now. But it is just a story.

I am not denying the science.  I accept it.  But the story is another matter. There could be a different story.  The magma lake under Yellowstone could blow taking a chunk of the USA with it and spreading a cloud of dust and ash through the atmosphere which brought on a new ice age. No global warming. Temperate places like Africa could be the new centers of human civilization. This is another scientific story.

Zachoeje Rinpoche cautions his students about stories.  Of course he means the stories we tell ourselves about our personal realities. "If only I had this or that, then I would be happy." "That SOB at work is making my life miserable." Rinpoche asserts that 95% of the stories we tell ourselves have nothing to do with reality. I've seen the truth of this in my own life. As the Dalai Lama says, happiness and misery come from within, not without.  So the happiness our stories promise us probably is a phantom.

What about the apocalyptic stories scientists are telling us, or even our Christian friends' end-of-days story of the Rapture?  There were apocalyptic stories in the past.  Christians were sure that the year 1000 AD would be the last. They didn't expect the next thousand years, but here we are.

In good Buddhist fashion Rinpoche suggested that since we cannot avoid making up stories, why not make up pleasant stories?

Here is a story that is entertaining me these days. Five miles from my home there is a basaltic ridge whose crest is covered with hundreds of petroglyphs.  No one is sure about why they are there, other than that the patina on the basalt can be pecked away to leave images whose meanings elude us. Just below the ridge crest there is a cave which is high enough to stand in and perhaps 15 feet deep.  It has a wonderful view across the Santa Fe mesa to the Sangre de Christo Mountains. In my story ancient people came to the cave to fast, pray and seek a vision.  They each left a record of their vision by pecking away at a basaltic surface. Hundreds of petroglyphs; hundreds of holy visions.  Surely the ridge is a sacred place, though not to the teenagers who scamper over the rocks like gazelles. They have different stories than mine.

But I like my story.  My home now is oriented toward this cave. The basaltic rocks on all sides of it are full of presence.  They are a living earth which has embraced humans for millennia. In my story there is a future with people who once again come to the cave for visions. Their ancestors probably will have endured many tribulations.  But the cave will be waiting.  They will know that this ground is sacred, and they will come.