On Finding and Losing your Mind

It is amazing how un-reflective, how un-self-conscious we can be. Every day we go to sleep and wake up. But we rarely think about what might be happening in the process; it just does not seem all that important. If asked, we would probably reply that the world does not disappear when I am asleep because it is still here when I wake up. So of course this means that I must disappear when I am asleep.

Isn't that a bit odd that you disappear every day? Well of course, you think, my body did not disappear, it was still here relaxing in bed. So what did disappear?  Your mind, your consciousness or awareness of the world disappeared, you might conclude. In which case you became conscious again when you woke up.

Sorry; now I am making you self-reflective (perhaps unfortunately so).

So now we have this new thing in which we believe: consciousness or mind.  What the heck is that? We only know we are conscious right now because we were not conscious when we were asleep. So does this mean that consciousness depends on not-consciousness? That the mind depends on its nonexistence? That is a pretty strange phenomenon.

It is not as if this oddity is a new thing, a modern thing that only troubles over-educated elderly white guys like me. We have this 1,500 year old story from China about a conversation between the 1st and 2nd Zen ancestors:

Huike said to Bodhidharma, "My mind is not at rest. Please pacify it."

Bodhidharma replied, "Bring me your mind, and I will pacify it."

Huike said, "Although I've sought it, I cannot find it."

"There," Bodhidharma replied, "I have pacified your mind." 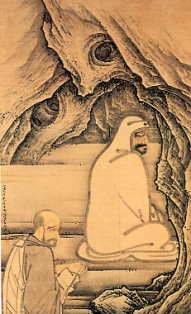 What does this mean that the 2nd Zen ancestor, Huike, could not find his mind? Probably not that he was "out of his mind." So, if we cannot find our mind, do we even know what we mean by mind? I am sure some people would say that they mean "thoughts." Maybe there is no such thing as mind, there are only thoughts?

Unfortunately no scientist has worked out how a hunk of meat can produce a thought, let alone a mind. On the whole, the philosophers are not doing much better. Rene Descarts famously stated "I think, therefore I am." He was a smart guy, but he did not write "I think, therefore I have a mind."

So what is this mind, this consciousness, this awareness, that appears and disappears every 24 hours? Are these three even the same or are they different? We don't really know because like Huike, although we can find our thoughts, but can't find our mind.

What a mess! Is there anything more important to us than our bodies or our minds, and though we know some things about our bodies we cannot, in principle, objectively know anything about our mind.  We have to lose our mind in sleep to find it when we wake up to even know we have a mind!

OK, enough for the moment.  Have a good day and a peaceful night while you lose track of the mind you cannot find.