Appearance and Reality in Glacier Park

It  seems that pretty much everyone who comes to Glacier Park has a camera at hand and drawn by the beauty of the space, attempts to capture that beauty. I am no different in that respect and brought my cameras here. I am still an amatur, and no matter how hard I try I seem unable to capture what I see. But I don't think that this is just a matter of my lack of technical skill. Rather, I have concluded, the elusive beauty of what I am seeing is a mixture of sight, sound, smell and presence -- and the camera can only capture the first.
Early one morning Kayla reminded me that this mountainous bowl surrounding Swiftcurrent Lake has a deep silence to it which underlies the bird cries, the distant rumble of the waterfall and the silent people sleeping in the lodge around us. I recognized the presence of the mountains in this silence, a presence which was a bit uncomfortable as I first began to open to these mountains.
When I turn my camera in their direction I find that I separate myself from their presence in the very attempt to capture it. Perhaps the great photographers are great for the very reason that they know how to invite the presence of the mountains and trees into their cameras, and not just their appearances.This all seems like a verson of the Buddhist Two Truths: the ultimate nature of things (presence, in this case) and their appearance. I think that as a photographer I must be caught in the realm of appearances, that I have not found how to allow the presence of the ultimate into the appearances.Sometimes Buddhists seem so intent on departing from appearances, to get so caught up in the quest for the ultimate that they forget that in truth there is no difference between these two. As the Heart Sutra says, form is emptiness, emptiness is form, form is not different from emptiness, emptiness is not different from form. Perhaps great photography can be a way of honoring this truth.  Perhaps a great photograph can be a mirror which reflects both the beauty of appearance and the reality of presence. I think that is what the great Chinese landscape painters understood. When I look at their pines I see the history of wind and water in their shapes. Their dynamic essence is revealed in their static form.

Many Glacier mandala
As we passed the days in Glacier we became more attuned to the presence of the silence in the mountains. From the point of view of our hotel, the Swiftcurrent Valley is a great mandala, with Grinnell Point as the central mountain deity, surrounded by peaks at the cardinal and ordinal directions. The valley opens from the east and our hotel sits on the eastern shore of Swiftcurrent lake, which is at the foot of Grinnell Point. To the northwest is Heavy Shield Mountain, as the Blackfeet call it. 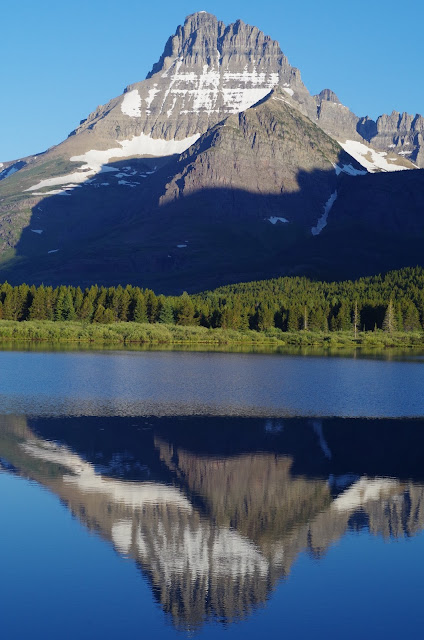 Heavy Shield Mountain
A great female shaman had a vision of the shield when she did retreat in the valley, and the Blackfeet honored her vision by so naming the mountain. Remembering that the valley is a mandala each day I entered the presence of the silence, and though I honored Grinnell Point, I was curiously drawn to Heavy Shield. Does this mountain have something to teach me?Our last night in Glacier I sat on a darkening balcony, camera on tripod next to me, watching the crescent moon slide down and across the sky from Grinnell to Heavy Shield. This was the first time I had waited for a camera shot to show itself to me. In time Heavy Shield offered me a gift as it showed its dark presence crowned by moon and planets. The secret of presence is revealed in the waiting, in the receiving rather than the taking. 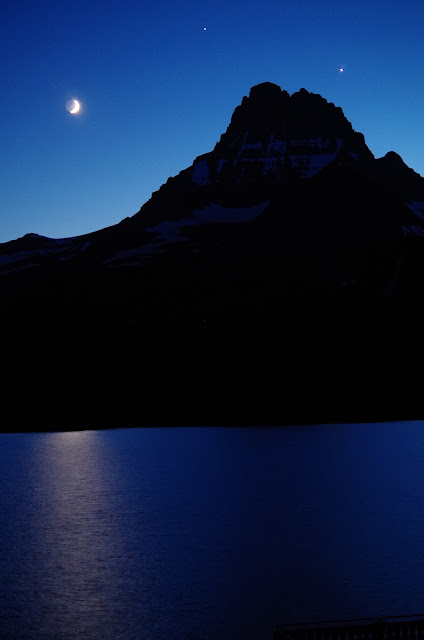